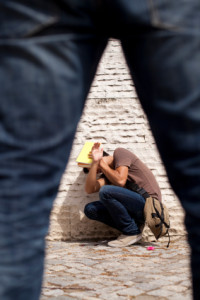 You’d think a bullied child or teen has enough to deal with in the present, but new research shows that bullying can impact their lives well into the future – both legally and psychologically.

Kids who are bullied repeatedly more likely to become bullies themselves, AND they’re also more likely to end up becoming criminals and prisoners than non-bullied peers. Criminologist Michael Turner presented this shocking finding to the American Psychological Association this year.

Turner examined data from the National Longitudinal Survey of Youth, a long-term study following young people from ages 12-18. Digging for clues on what happens to those who are repeatedly bullied, he discovered they were likelier to:

Young women who are repeatedly bullied are at highest risk of these outcomes, according to his research.

If all this seems unfair, it even gets worse. Another recent study, Impact of Bullying in Childhood on Adult Health, Wealth Crime, and Social Outcomes, paints an even bleaker picture.  The international US and British research team examined data from a long-term study of young people, some as young as age 9, all followed until age 26.

Like Turner, the US/UK study found that kids and teens who were repeatedly bullied were not just more likely to become bullies, but also likelier to:

This US/UK study uncovers some troubling links. For one thing, it appears that targets who become bullies tend to have pre-existing mental health problems and come from either financially poorer families or high-stress environments. That means they don’t have the skills and supports they need to deal with bullying. They’re already vulnerable, at-risk kids, but bullying makes things worse.

The damage tends to be greatest among young women, confirming earlier research from Finland showing 8 yr-old girls who are either bullies or frequent targets are likelier to become mentally ill, even if they were mentally healthy at the onset of bullying.

Bullying can change brains and bodies long after the fight in the schoolyard. It can damage your DNA and hormones related to happiness and depression. The stress of bullying shortens your telomeres (DNA structures related to longevity and cancer fighting). Habitually bullied kids show changes in the hormones and neurotransmitters that affect memory, concentration, physical growth factors, and immune systems.

So some kids have the cards stacked against them early. That doesn’t mean their fate is sealed. It certainly doesn’t let us off the hook. It’s in our collective interest to look after vulnerable kids early, so we don’t have to look out for them later, on the streets, in prison, and in mental health facilities.

Here are things adults can teach kids early, and model in our own lives:

Like Scrooge, we’ve had a wake-up call from these studies, looking at the future that could be. Let’s change the writing on the wall and intervene in bullying as soon as we can, so the future is positive for us all.

M Turner, “Repeat Bully Victimizations and Legal Outcomes in a National Sample: The Impact Over the Life Course,” Presentation to the American Psychological Association, Aug 1, 2013

Permanent link to this article: https://bullyingepidemic.com/long-term-effects/