Workplace Bullying: 15 Tips To Stop It

Judge Scott Crichton: Laying Down the Law on Bullying 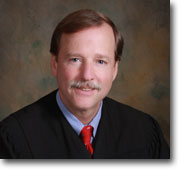 “I had to live with a bully for three years at boarding school,” he says. “My sense of bullies is they have weak, fragile egos and bullying makes them feel bigger and better.”

Crichton’s combined personal and professional understanding have moved him to speak publicly on the issue. His presentation, Sexting, Texting and Beyond, designed for middle-school students, includes real-life stories of bullying and its legal and human costs.

He speaks of 15-year-old Danielle Cox, so depressed she texted her friend saying that she wanted to hurt herself. Her friend asked classmates to cheer Danielle up. Instead, one young man sent Danielle more than 100 cruel text messages, disguised to look like they came from multiple people. Danielle was so devastated that she took her own life.

Judge Crichton targets middle-school kids because they don’t realize that the decisions they make at an early age can have a permanent impact on their own and others’ lives. Sadly, kids don’t realize this.

“These are young kids,” he says. “They’re immature emotionally.”

Keep reading as Judge Crichton shares his insights with BullyingEpidemic.com.

BE: Judge Crichton, we often talk about adult responsibility in bullying prevention. What are the legal responsibilities of parents when it comes to bullying?

Judge Crichton: Under Louisiana law, parents can be held vicariously liable for the tortious acts of their un-emancipated minor children. Cyberbullying is both a crime, for which the teenager can be found guilty and sentenced, and it is a tort which the parent can be held civilly liable.

BE: What are the moral responsibilities of parents, even when the laws don’t specify?

Judge Crichton: Morally, it is wrong to harass and bully another. In the event the parent knows, or should know under the circumstances, that his or her child is bullying a classmate, that parent should take appropriate and prompt action.

BE: When young teens sext, they think it’s harmless. What are the legal implications of minors sexting one another? Do you think making sexting illegal is the right way to handle this problem?

Judge Crichton: Yes, by many of the state legislatures making sexting a misdemeanor crime, the awareness of this potentially dangerous problem is heightened – to the extent that perhaps teenagers will think twice before they engage in this inappropriate behavior.

BE: Cyberbullying often happens off school grounds. Do school administrators have any authority over students that engage in off-campus bullying?

Judge Crichton: It depends on the circumstances, the general rule being where there is knowledge, there may be a duty to take appropriate action.

BE: Bullying has an impact on everyone’s school year, but what kind of impact can it have on a bully’s future in school?

Judge Crichton: The bully is actually disrespected by his peers and the bully is not remembered in a favorable light during the years and decades after high school.  The bully actually has low self-esteem, which is bolstered by committing harm on someone who is vulnerable.

BE: Anything else you wish to add? Any questions you wish we’d asked?

Judge Crichton: Thank you for the opportunity to weigh in on this important subject.

BE: Thank you, Judge Crichton!

ABOUT JUDGE CRICHTON: Judge Scott Crichton is a judge with Louisiana’s 1st Judicial District Court in Shreveport, Louisiana. He’s dedicated to helping young people avoid trouble with the law, talking to elementary, middle and high school students through the “Don’t Let This Be You” program.

Permanent link to this article: https://bullyingepidemic.com/judge-scott-crichton-laying-law-bullying/