How Does Bullying Affect the Bully? 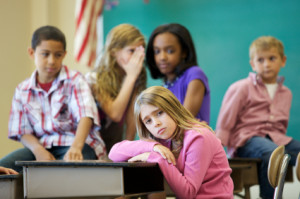 In our last blog post, we’ve looked at the role of the bully.  In part two of our series, we are going to focus on the biggest part of the bullying problem – the bystanders. The most important idea to remember is this: There are NO innocent bystanders. Bystanders enable bullies, whether the collaboration is conscious or unintentional.

Bystanders to children’s bullying can be children or adults, usually both. Child bystanders are kids frozen to inaction, friends or peers who fail to step up and protect a child under attack. Adult bystanders, commonly parents or teachers, are often reluctant to deal with kids’ bullying unless they have witnessed it directly. Sometimes adults know or sense that something’s going on, but fail to intervene strongly and consistently in the early stages, while it’s still easy to stop the problem. Both of these faulty approaches leave kids vulnerable and at risk of escalating attacks at the hands of bullies who know adults are not paying enough attention.

Bystanders can be active or passive. Active bystanders may cheer the bully on or encourage bullying with the language of acceptance: “Everyone talks that way” or “Nobody invites her” or “He’s just a loser.” Passive bystanders enable bullying by looking the other way, without intervening or reporting.

Sadly, bystanders often take action only after significant damage – or death – has occurred. Post-mortem candlelight vigils are useless to the target. Failing to stand up when a child needs help and protection is a huge betrayal, contributing to the helplessness and hopelessness that targeted kids feel. Being a longstanding target of bullying is a risk factor for teen and preteen suicide.

Children frequently use the defense “It was just a joke” or “We were just kidding.” Adults don’t want to accuse children unfairly and, uncertain of the next step, these deflecting defenses can stop well-meaning adults in their tracks. Unfortunately, doing nothing is not neutral, and allows the bullying to continue. Kids quickly learn this is an effective way to sidestep punishment or consequences. Help kids learn to recognize the effect their actions have on others, whatever the intent, and insist on genuine and quick apologies when mistakes are made.

There is a price to pay for not speaking up. Bystanders often experience severe stress and carry longstanding guilt for failing to come to the aid of a classmate in danger, even if the target asked that no adults be told. Bystanders can suffer academically, with their brains always partially distracted by “fight or flight”, scanning the horizon for danger instead of concentrating on math. Schools with significant bullying problems have lower test scores, more absenteeism, and lose substantial teaching time to discipline issues. Bystanders, like bullies, are more likely to have later life problems with drugs and alcohol.

How can bystanders take action? Adults must teach children to stand up as a group to stop bullying and to protect targeted classmates at the first signs of bullying. It’s not recommended that a single child try to stand up to a bully by themselves. We can give kids the language of positive peer pressure: “We don’t treat people like that in this school” or “We don’t do that here” or “Come hang with us until he cools off.”

Don’t bully the bully. When a kid makes a mistake, show them the path to change. “You can come back and play when you’ve got it back together. Take a few minutes to calm down.” This approach teaches several lessons:

Adults must shoulder the main responsibility for leadership, leading the way, showing no tolerance for bullying. Encourage kids to find adult help. Adults must resolve to really help, consistently and persistently, until the problem is solved, with intermittent monitoring to ensure that it does not return. Adults must intervene at the first signs of unkind or bullying behavior. And adults must clean up our own bullying behavior – we can’t tell a child not to bully, then turn around and be a bully ourselves!

Albert Einstein said, “The world is a dangerous place to live; not because of people who are evil, but because of people who don’t do anything about it.” Join us, the growing movement of adults and children taking action to reduce bullying. Working together, we can make a huge difference. Make every day bullying prevention day!

To learn more about bullying and bystanders, and how to coach bystanders to action, see:

Permanent link to this article: https://bullyingepidemic.com/bullying-and-bystanders/