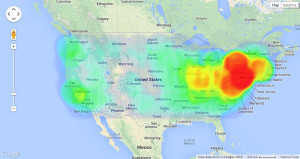 Just when you were thinking the worst of big data – Big Brother, personal records captured and used by government and industry for their own purposes, violation of privacy and civil liberties – we’ve got a great story about using that info for good. Viraj Puri, a 13-year-old (amazing!) from Virginia, has harnessed the power of data from social media websites Twitter, Facebook, and Google+ to draw “heat maps” of the geographical locations in the US where bullying is most likely to occur.

As you might expect, East Coast metro areas, with their population density and tech orientation, are some of the hottest spots for cyberbullying. Viraj’s  work has drawn the attention – and collaboration – of some experienced, adult Big Data users. Kalev Leetaru, a Yahoo Fellow at Georgetown University, was intrigued by Viraj’s concept and is now working with the teen to help further the project. Leetaru used social media data, including locations, which are publicly available, to draw an “emotional heat map” of the US in the aftermath of Super Storm Sandy.

Beginning around 2011, computer and social scientists at several universities started to “teach” computers to recognize bullying and the emotions that go with it. Searching Twitter, Formspring, and other social media platforms, tweets (for example) are read as short text messages and analyzed for specific words and combinations that suggest bullying. Using machine learning, computers were able to identify bullies, targets, and several types of bystanders.

What makes these big data surveys different from earlier methods of assessing bullying, questionnaire-based student surveys of bullying, is the ability to continue to monitor the social media messages over time, as the problem ebbs and flows.

Viraj is eventually planning to incorporate real time updates to the data base, with the ultimate goal of making this a tool for predicting – and preventing – bullying before it happens. Learn more and support Viraj’s work at his website: Bullyvention.com

Viraj has big goals that we should all aspire to. In his words, “If we can even save one person from suicide, that’s a big difference right there.” Well said.

Permanent link to this article: https://bullyingepidemic.com/teen-uses-big-data-bullying-prevention-tool/