When Sibling Rivalry Gets Ugly 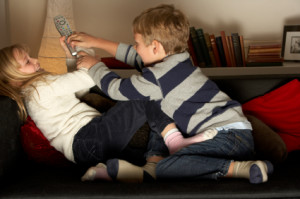 If you have the average 2.2 children, you probably have 2.2 times the interfamily conflict: a.k.a. sibling rivalry. Those of us with siblings all have stories to tell – for better or worse. My brother and I got along pretty well, mainly because he’s seven years younger and spent most of his childhood outside. My main challenge with him was finding him for supper.

Brenda[1] also grew up with a brother – one who was five years older. Life with him was a mixed bag, she recalls.

Now she’s the mother of two boys, aged 3 and 5. With brothers so close in age, there’s a lot of competition for attention from parents … and each other. She and her husband spend much of their time addressing the boys’ constant bickering.

“Kids are good at pushing their siblings’ buttons,” she observes. “They know how to drive each other nuts.”

There may be something to birth order in bullying. Ersilia Menesini and her colleagues at the University of Florence published a study in the British Journal of Development Psychology examining this very idea. First-borns get all the attention before their sibling is born, assume authority, and express it from an early age – perhaps aggressively.

Older siblings model how to behave socially, and if it’s not positive modeling, it can lead younger siblings to exhibit nasty behavior inside and outside the home.

While we brush off sibling rivalry as a normal part of family life, it can get ugly – both psychologically and physically. That’s when it’s better named sibling bullying.

This summer, researchers at the University of New Hampshire revealed that sibling bullying has the same mental health impacts – anxiety, depression, anger – as peer bullying. If a child is victimized at school and at home, the dangers are compounded.

In the study, Corinna Jenkins Tucker and colleagues at the Crimes Against Children Research Center examined a survey of more than 3,500 children and their caregivers across the US.

The survey was designed to uncover how many times the children (aged 0 to 17) had been hurt in the past year (psychologically or physically), who hurt them, and how they were hurt. It also looked at the psychological impact of the damage.

Even if kids under 10 weren’t physically injured, they surprisingly suffered severe distress from typical sibling tussles: things like having older siblings tease them or take their personal possessions away. Naturally, siblings of all ages suffered significant mental distress when physically injured. Tucker and her colleagues found the trauma was the same as with peer bullying, across the board.

Now that we know that sibling bullying is not benign, here are some tips on how to deal with sibling rivalry from experts at EmpoweringParents.com and the Cleveland Clinic:

Permanent link to this article: https://bullyingepidemic.com/sibling-rivalry-gets-ugly/