Workplace Bullying: 15 Tips To Stop It 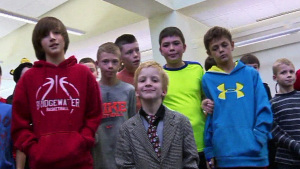 This time of year is about celebrating light – especially the light within each other. There is darkness out there, but we overcome it the best way we can: Together. So in the spirit of the season, we want to share some stories about young people who truly shine. We promise you – your eyes are going to shine, too!

THE WATERBOY. Danny Keefe, 6, is waterboy for the 5th grade Badgers football team at Williams Intermediate School in Bridgewater, MA.

Even though he’s only six, he’s already a sharp dresser, wearing a suit, tie and fedora to school. He also happens to have a condition that makes it difficult to speak.

Sadly, he was teased at his elementary school.  What went right? When his older friends in the football team heard about the teasing, they decided to stand up for their young friend in a powerful and delightful way. Quarterback Tommy Cooney, 11, and his teammates all went to school dressed up like Danny with shirt and ties for a spontaneous Danny Appreciation Day.

True Upstanders, their act of solidarity with young Danny made it to the local news, and the resulting video went viral, with more than 1.2 million hits. Most importantly, Danny feels loved and knows he has the protection of big brothers.

We feel it’s important to report another aspect of this story, and give additional credit where it’s due.  We talk about how important it is for adults to intervene immediately at the first sign of bullying. In researching this story, we learned that Danny’s teacher witnessed the bullying incident, and put a stop to it immediately.

We also know that adults are key in nurturing exemplary behavior. Clearly, the Williams Intermediate football coach, who calls his Badgers team ‘a Band of Brothers,’ and other teachers there are living up to their mission: “to provide excellence in education for all students in an environment that values the individual.”

FROM BULLIED TO BOLD. Caine Smith, 11, is like so many other likeable kids. Sadly, he’s harassed and physically bullied regularly, to the point he claims a good day would be one in which nobody touched him. He’s teased because he has two Moms, and because he has long hair – neither of which is really remarkable, but seems to be enough to get him hurt.

What is remarkable, as you’ll see in this video, is his response. He’s resilient. He could teach the rest of us how to chill out after hard days as he channels his frustration into success at video games. He escapes into books like Harry Potter, another bullied hero who happens to have magic powers.

Caine says he wishes he had magic powers like Harry Potter. But as this video demonstrates, he does! His magic powers: Courage and boldness. As Goethe said: “Whatever you can do or dream you can, begin it. Boldness has genius, power and magic in it!”

Watch this bold young man stand up for all bullied children in his school district and encourage others to “speak out and rise up and help each other out to get rid of bullying”:

We encourage you to share these videos. In the spirit of these inspiring, brave young people, Make Every Day Bullying Prevention Day!

Permanent link to this article: https://bullyingepidemic.com/celebrating-truly-stand-boys/